Items in Bold were hidden at the room

A High Place
Add a photo to this gallery

An example of where the 1st Anniversary Balloon was found. 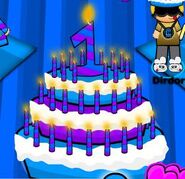 Where the Cake Hat was found.

Where the 1st Anniversary Party Hat was found in The Shop.
Add a photo to this gallery
Retrieved from "https://jacksjourney.fandom.com/wiki/1st_Anniversary_Party?oldid=10552"
Community content is available under CC-BY-SA unless otherwise noted.